MARINE POLLUTION: A waste cleanup team formed by the Taoyuan City Government hopes to change the public’s behavior and reduce production of waste at the source

A marine waste cleanup team established last year by the Taoyuan City Government hopes to inspire change in public behavior by exposing the extent of waste near the coast, it said on Saturday.

The team — which conducted its first cleanup on July 28 — is headed by Taoyuan Office of Coast Administration Construction Director Lin Li-chang (林立昌).

“Our mission is not to clean up all of the waste in the sea, but rather to improve public awareness of the marine ecosystem and thereby reduce the production of waste at the source,” he said. 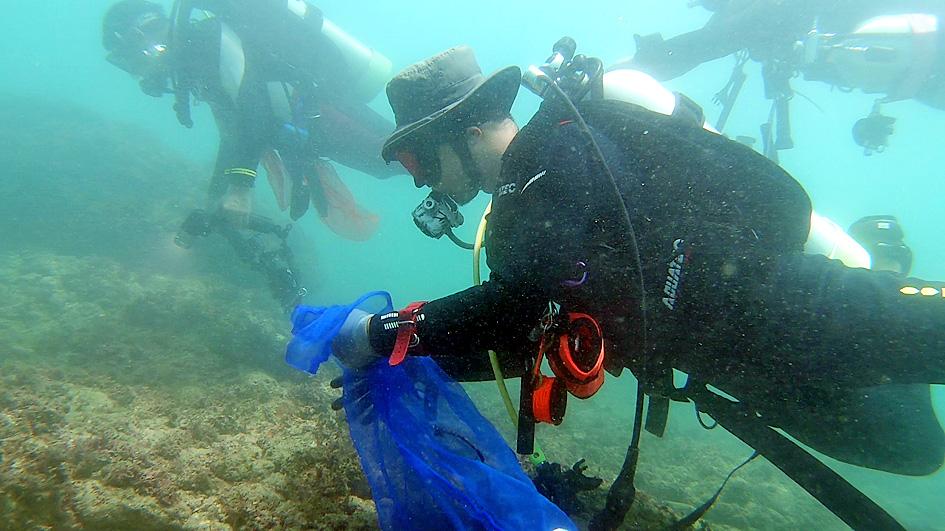 Photo courtesy of the Taoyuan Office of Coast Administration Construction

Waste is a common sight along Taiwan’s west coast and when the team cleans up a section of the coastline, it finds waste at the same spot again the following day, he said.

“Part of it drifts here with the ocean currents from other countries, and part of it is domestic waste that washes into the sea through streams and rivers,” Lin said.

Lighter waste, such as plastic and polystyrene foam, generally float on the ocean’s surface, while heavier garbage — including fishing nets, glass, dense plastic items, such as disposable utensils, and metal items — sink to the bottom, he said.

“All of this is human-made waste. It is not uncommon even to see discarded bicycles on the ocean floor,” he said.

The team chose the spot because, unlike other areas along the west coast where drifting sand makes the water murky, the clear water allowed the team to clearly demonstrate the extent of the waste problem, Lin said.

However, even there team members could only see about 30cm ahead in the water, he added.

“I believe that through these cleanup operations we can slowly influence the behavior of people living nearby,” he said.

However, safety was also a concern, and the team limited its activities to waters near the coast, and always took the season and weather into account, Lin said.

“The northeasterly winds that blow during the winter have a major effect on Taiwan’s waters, so we largely limit our operations to the period between May and October,” he said.

The team also works with fisheries officials and uses data analysis to determine when visibility in the water would be least affected by coastal sand drifts, he said.

Want to join the discussion?
Feel free to contribute!