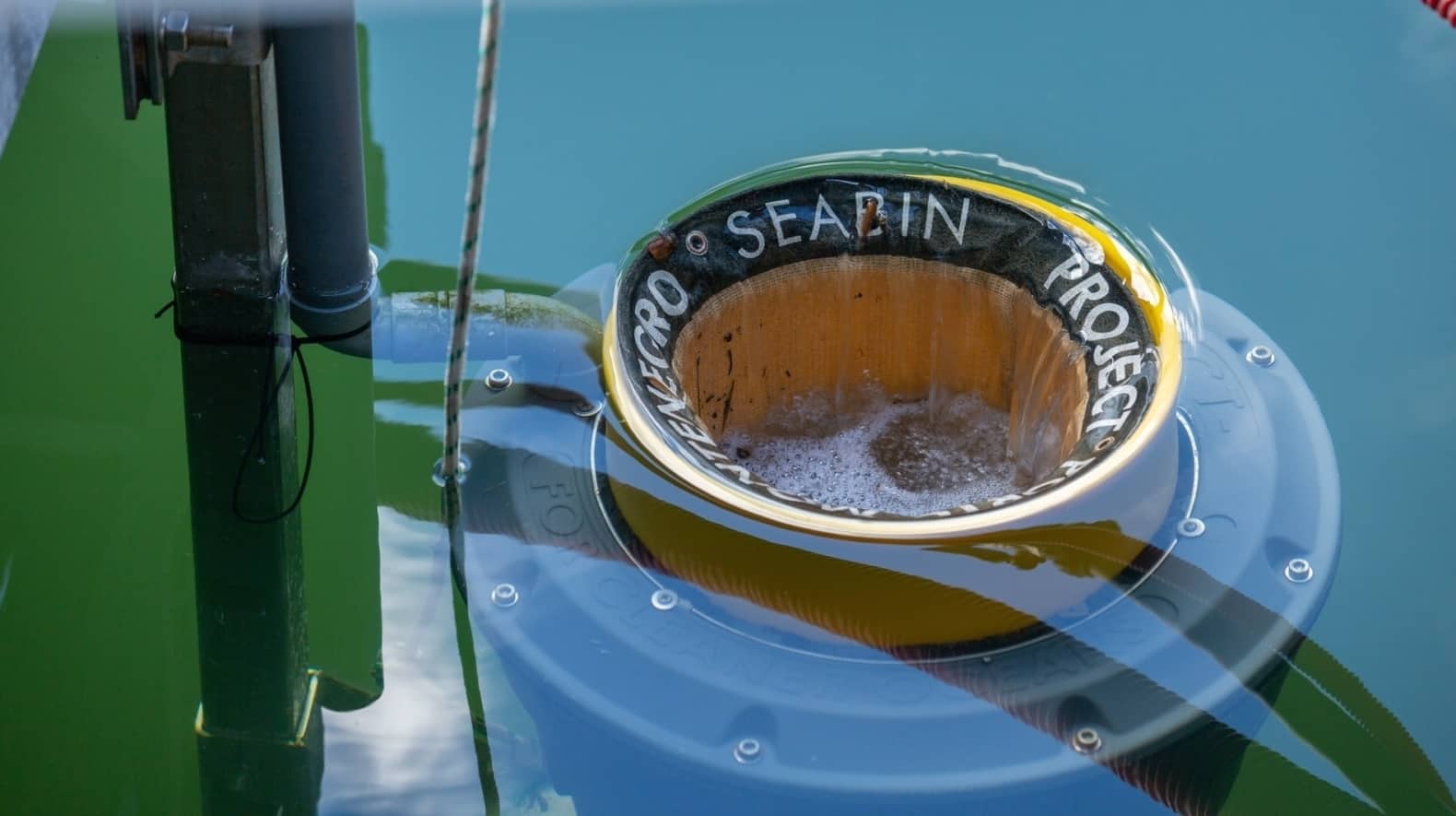 A small floating device can be heard quietly whirring from the dock in Montenegro’s Bay of Kotor, helping to solve one of the world’s biggest environmental problems.

About eight million tonnes of plastic waste is added to the oceans every year — equivalent to one garbage truck of plastic being dumped into our oceans every minute — according to a study conducted by the World Economic Forum, the Ellen MacArthur Foundation and McKinsey.

This figure is predicted to quadruple by 2050, if no action is taken. And plastic pollution is already having an increasingly devastating impact on our marine ecosystem.

But how do we clean the plastic that is already in the ocean? And how can we inform and educate people to prevent the problem from occurring in the first place?

Cleaning the ocean of plastics is a mammoth task. But part of the answer may lie in the floating device whirring in the Bay of Kotor. An innovative ocean-cleaning technology known as the Seabin, it collects trash floating in ports and marinas — and simultaneously collects data on the state of global waterways, guiding efforts to clean the oceans. The Seabin is also used to raise awareness and educate the public to prevent ocean pollution.

Montenegro’s Bay of Kotor has a plastic problem. The seaside region, where mountains tumble into the crystal clear waters of the Adriatic sea, is a UNESCO world heritage site. Yet the local coastline has a higher-than-average level of plastic pollution as compared to European beaches, according to research conducted by the Institute of Marine Biology in Montenegro.

But Porto Montenegro, located in the heart of the Bay of Kotor, became the first marina in the world to receive a 5 Gold Anchor Platinum accreditation for exceptional marina operations, including high levels of environmental management, from The Yacht Harbour Association (TYHA) and the Marina Industries Association (MIA) in 2017.

This accreditation is in part due to the port’s use of the Seabin. Anchored at sources of pollution — marinas, docks, yacht clubs and commercial ports — the Seabin runs 24 hours a day to capture plastic that would otherwise wash into the ocean system.

“It’s basically a bucket with an internal sleeve which goes up and down,” said Porto Montenegro Marina Manager, Roddy Blair. “Water is sucked in from the surface and passes through a catch bag inside the Seabin, with a submersible water pump capable of displacing 25.000 liters per hour, plugged directly into 110/220 volt outlet. The water is then pumped back into the marina leaving litter and debris trapped in the catch bag.”

It can catch 1.5kgs of floating debris per day depending on weather and debris volumes, including microplastics up to 2mm small.

“We find all sorts of things: we have a lot of cigarette butts, we have a lot of plastic bottles… We find small microplastics,” Blair says. “Some days we’re emptying the Seabin every hour. During the first six months of testing, we collected around 800 kilos of organic and non-organic floating debris.”

The Seabin’s impact on the marina has already been noticed.

“Since the Seabin was implemented in Porto Montenegro, we don’t have any more problems with the garbage all over the place,” says local resident and restaurant manager, Ana Garbin.

With the data that it collects all over the world, the project can have a global impact.

Data sharing: a critical new component of the project

Following successful trials, the Seabin is now being globally deployed to help tackle the growing ocean plastic problem. Today, there are 400 Seabin units in 23 countries around the world, including Spain, Finland and the USA. Each one contributes to gathering vital intelligence on the ocean’s pollution problem.

After manually sorting the marine litter collected by the Seabin filter by hand, the device operators catalog the items found and use this for base data collection.

“We also record the weather conditions,” says Seabin co-founder, Peter Ceglinski. “All this information will give us an indication of the state of our waterways, and what we can expect with different types of weather and what volume of debris will be in the water.”

Recognizing the significance of this reliable, high-quality data on marine debris from around the world, the organization launched the Seabin Share Program, a common platform for environmental groups to reduce ocean plastic pollution through practical and measurable solutions.

Currently being trialled with the Mirpuri Foundation in Cascais in Portugal, Ceglinski already has plans to expand the program with six environmental agencies around the world.

“The writing is on the wall [that we need] to reduce waste with or without data. But the data will help to understand the health of our waterways and in pinpointing localized waste issues,” says Ceglinski. “The data will be open source and available to anyone who wants it.”

At present, information is shared through spreadsheets, but the team is working on an app for the next stage and hopes to implement sensor technology in future stages.

Inspiring the next generation

Seabins alone, of course, are not the solution to the ocean’s plastic problem: education can create systemic change. Understanding this, Porto Montenegro engages local school children in the Seabin project to increase their awareness about the lasting impact of plastic pollution.

RELATED: Enlisting technologies in the fight against climate change

“We show them the Seabin and talk about plastics. When they go back to school, they talk about the fish eating the plastics, the plastics going into the food chain; it’s a talking point,” says Blair.

Children can play a direct role in reducing future plastic pollution by making them aware about the impact of their actions on the ocean. So far, the program has been a hit.

“I did like being a part of the Seabin project, because it gave me a lot of information about plastics in the ocean, and it’s helped me find out how we could help,” says Sky, a Year 7 student at a local school.

And they can see the benefit of the technology, with one child asking for further expansion.

“It would be great if people around the world would introduce the Seabin inside the ports,” says William, a Year 8 student at a local school. 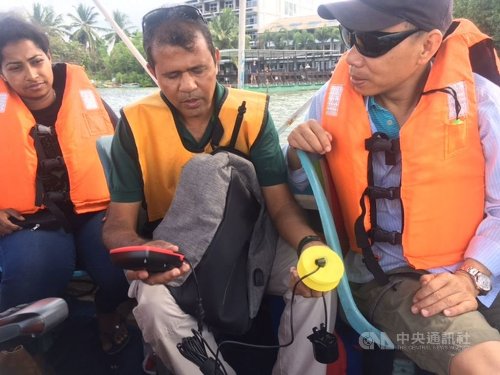 New Delhi, March 7 (CNA) A research team from National Sun Yat-sen University (NSYSU) in Kaohsiung, southern Taiwan has recently visited Sri Lanka to open a research center there for studies on the effects of climate change on marine resources and biosystems.

The university was selected by Taiwan’s Ministry of Science and Technology (MOST) last year to set up the Taiwan-Sri Lanka Environmental Change Sciences and Technology Innovation Center at the University of Sri Jayewardenepura in Sri Lanka to carry out studies on marine life, according to the Taipei Economic and Cultural Center (TECC) in India.

The TECC represents Taiwan’s interests in India in the absence of diplomatic links between the two countries.

Chen said that the center was established because the protection of marine life resources and marine biosystems has become increasingly important in both Taiwan and Sri Lanka amid rising concerns over global warming, ocean acidification and environmental change.

The center will play an instrumental role in enhancing exchanges between the two countries in marine life and ocean studies, and relevant studies carried out by the center are expected to help Taiwan and Sri Lanka to cope with the challenges of global environmental change, he added.

After the opening ceremony, the research team led by Hung Chin-chang (洪慶章), deputy head of NSYSU’s College of Marine Sciences, remained in Sri Lanka for research work that lasted until March 2.

The researchers took marine life samples from wetlands, estuaries and bays near Negombo Lagoon, a large estuarine lagoon in southwest Sri Lanka, and carried out a 36-hour observation of carbon dynamics in the lagoon to evaluate carbon dioxide pressure changes, Chen said.

They also took samples of Nypa fruticans, commonly known as the nipa palm or mangrove palm, a species of palm native to the coastlines and estuarine habitats of Southeast Asia and India.

Chiang Yu-chung (江友中), head of NSYSU’s Department of Biological Sciences, will collaborate with Sri Lanka’s University of Ruhuna to conduct studies on the species, Chen added.

After returning to Taiwan, Liaw will compare the microbiome with that collected from mangrove areas in Taiwan in preparation for breeding specific mangrove microorganisms with certain active functions, according to Chen.

In addition, the research team met with Sri Lanka’s Minister of Health, Nutrition and Indigenous Medicine Rajitha Senaratne to discuss the possibility of NSYSU providing assistance to Sri Lanka in plant genome analysis to help the conservation of biological resources in the country.

The team concluded its research in Sri Lanka March 2 and returned to Taiwan to continue follow-up research, Chen said.

(By Charles Kang and Evelyn Kao)