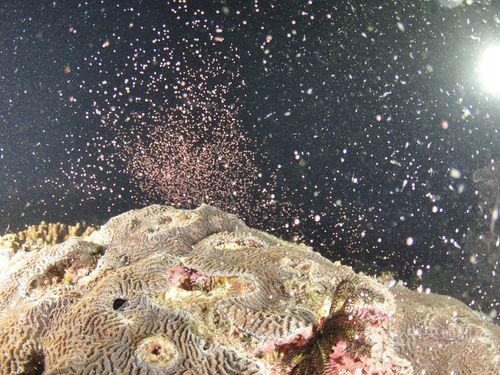 Taipei, April 29 (CNA) The phenomenon of coral reefs simultaneously releasing their tiny eggs and sperm into the ocean, known as coral spawning, has been recorded off Taiwan’s eastern coast for the first time, according to a team from Academia Sinica.

The coral spawning, which creates the appearance of an underwater blizzard with billions of colorful flakes, takes place once a year on cues from the lunar cycle and water temperature and often coincides with the birthday of the sea goddess Matsu in the spring.

The Biodiversity Research Center (BRC) of Academia Sinica has spent most of its time and resources in the past recording the spectacle in Kenting in southern Taiwan and in the Penghu Islands off the coast of western Taiwan during the coral’s breeding season.

This year, however, center researchers went to Taitung County in southeastern Taiwan on April 25 and 26 and discovered coral spawning off the coast of the port town of Jihui (基翬) for the first time.

BRC researcher Chen Chao-lun (陳昭倫) said he and his colleagues recorded seven kinds of hermaphrodite corals that have both male and female sex organs simultaneously releasing eggs and sperm, called gametes, into the ocean.

“It was like it was snowing underwater, with pink and purple gametes floating everywhere,” Chen said.

Another special coral spotted spawning was the Goniopora tenuidens, a rare gonochoric species in Taiwan that is unisexual and only releases its sperm, Chen said.

“The great amount of sperm released by the Goniopora tenuidens looked like a thin white fog around the coral colonies,” the researcher said.

Even though the discovery of the underwater spectacle showed the corals in eastern Taiwan to be healthy and capable of reproduction, the species’ habitat is nonetheless being threatened with destruction due to human activity, Chen said.

In late February, Chen and two NGOs, the Taiwan Environmental Information Association and Citizen of the Earth, released a joint statement saying the environmental evaluation of a development project near the Jihui coast did not include an assessment of its impact on coral reefs.

Work on the project, called “Baosheng Marine Eco-park,” kicked off on March 1, and Baosheng Corporation Chairman Lu Ming-hsien (呂明賢) said the project would not endanger the coral colonies because the construction site is a few hundred meters from the coast.

But the digging up of soil for other construction along the coast already seems to be having a negative effect on the coral reef’s health, environmental groups suggested.

The proportion of coral covered with sediment in Jihui reached an all-time high of 21.9-22.5 percent in February 2019, up from 15 percent to 20.63 percent in May 2018, according to an assessment report presented jointly by Chen and the two NGOs.

The coral reefs will get sick or even suffocate if covered by an excessive amount of sediment, the report said.

It even went further, saying that mass death of corals is inevitable “if any land-based development project nearby loosens the topsoil, which will be washed down by heavy rain into the ocean.”

On March 1, the Environmental Protection Administration (EPA) said it would send delegates to Jihui to understand the impact of Baosheng’s project on the marine ecology and decide whether an underwater evaluation is needed.

The EPA has yet to reach a decision.